J.M. Fastener World Inc is excited to announce the opening of our new Sarasota location!

We have partnered with Mark Rowe (formerly of MCS Metal Construction Supply) to manage our Sarasota branch. Mark has over 20 years experience servicing the Aluminum Construction Industry in Southwest Florida. We feel Mark’s knowledge and sales experience will prove to be a valuable addition to our growing company. 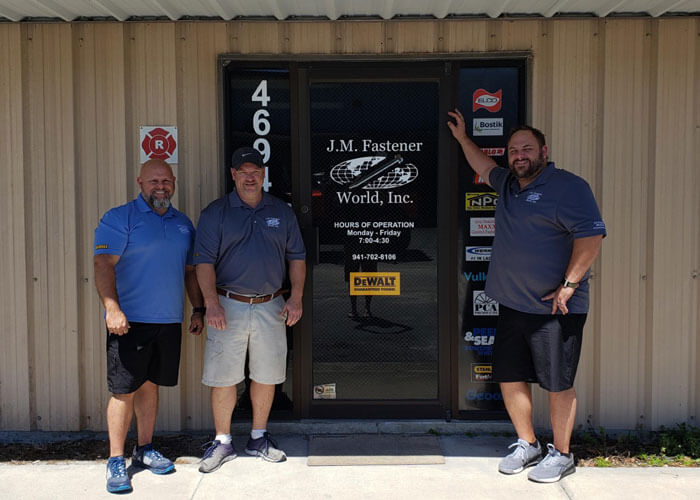 J.M. Fastener World is a 3rd generation family owned business and have been in business since 1987. Our story starts with our Grandfather, Joseph (Pop) Monaco Sr. He started in the fastener industry in the 1950’s when he lived in New York City and our father, Joseph Monaco Jr. worked in the shipping and receiving department during his teenage years learning the ropes. Years later Joseph & Peggy Monaco migrated to South Florida and eventually settled in Boynton Beach where he first opened J.M. Fasteners in 1980.

In the early 1970’s Joseph (Joey) & Bonnie Monaco moved to Florida eventually landing in Lakeland. Joseph Jr. worked in the fastener industry for another company at the time selling to the mobile home manufacturers. He eventually started our Business, J.M. Fastener World out of our Garage in 1987. When Pop decided to retire in the early 1990’s our companies merged to become what we are today. Joey & Bonnie’s two sons, James & Jason, assumed roles in the company after high school. When Joey & Bonnie decided to officially retire, James and Jason took ownership of the company and run it to this day. Since taking over the company and experiencing tremendous growth, they have expanded the product line to include other items besides fasteners to become a more well-rounded supplier.

“Our father always told us that price is important, but service is what keeps customers coming back. As owners of the company, service is what is most important to us and we look forward to serving you!”